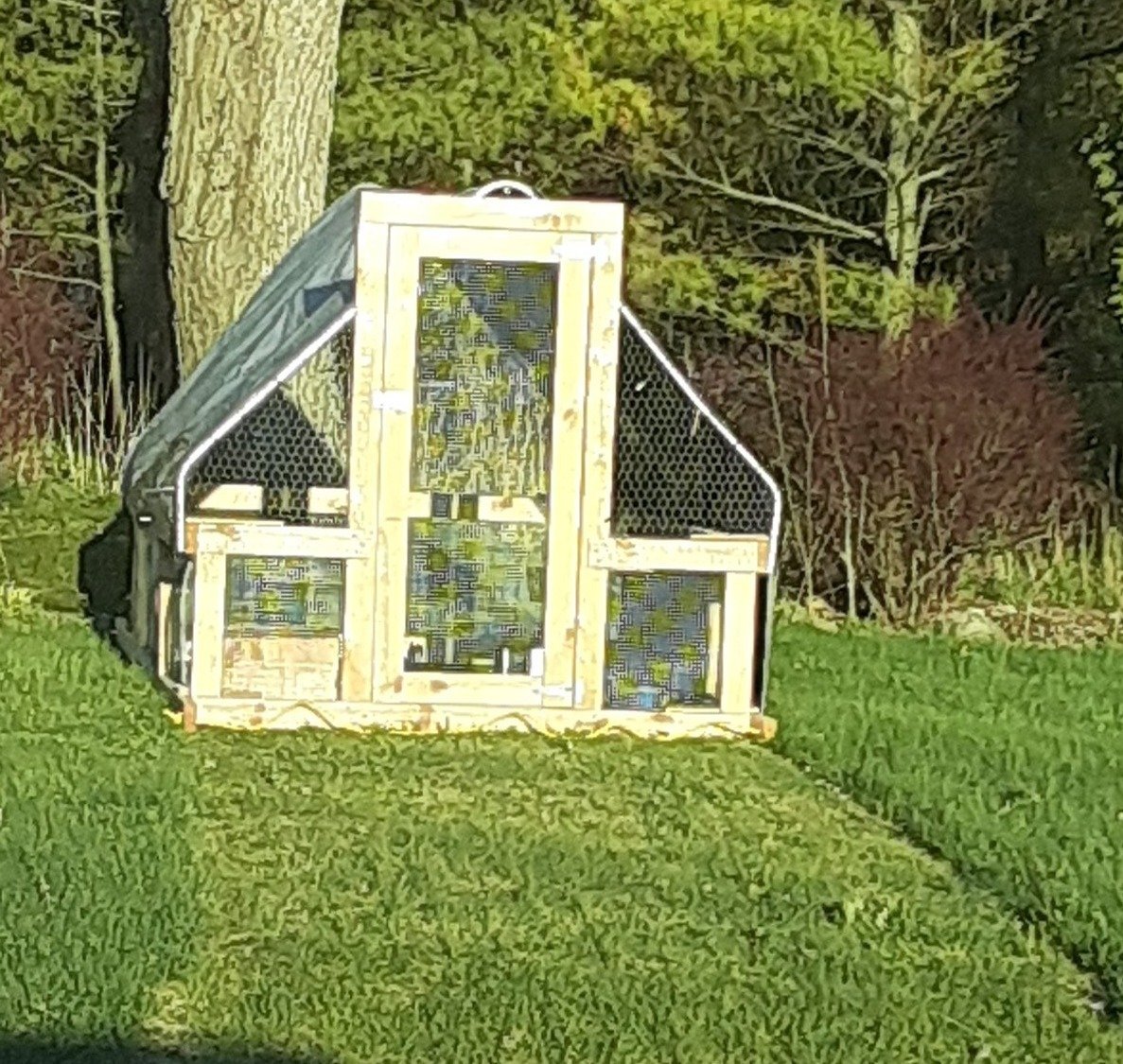 Breeding rabbits are caged indoors to avoid parasites (from living on the ground) and because they are territorial. Our rabbit cages are larger and taller than those at other rabbitries so they have plenty of room to stand on their hind legs and they have a shelf to jump up on (and for nursing mothers to "get away"). Also, unlike most rabbitries, our cages are not suspended from the ceiling, which we believe decreases stress.

Each rabbit has his/her own space, and they are near each other for talking and safely rubbing noses. They also have a communal space for play. When the weather is good, they go outside to run in the grass.

We have two breeding pairs, which allows us to breed year-round while ensuring plenty of rest for the mothers.

We hope to implement a system for year-round fresh-greens production, and are working on ways to move towards a fully pasture-based system.

Rabbit meat is one of the most environmentally friendly meats to produce, because they convert feed to meat at up to six times the rate as a cow, and have more meat per body weight than even chicken.

They have the best fertilizer. It's not acidic, and can be spread directly on your vegetable garden even during the growing season. We are working on developing a processing method to "share the wealth."

Lastly, we don’t waste their furs; hides are professionally tanned.

Many years ago, John the Tall received his first American Sable buck (male). Later, he bought an American Sable doe (female). Through the 4-H, we learned about rabbit care.

We experimented in the yard with growing forage, getting the rabbits regular outdoor exercise, and training. Babies followed – with lessons on genetics and healthy breeding, territorial behavior, and kindling (birth).

In competition, our rabbits and their offspring consistently placed very well at local shows.

American Sables are known for their gentle disposition, meat, and incredibly high-quality fur. Mostly their fur; after the fur industry collapsed, the breed nearly fell into extinction. Since those first two Sables were purchased, we have not been able to purchase another!

To keep our gene pool healthy, we introduced Champagne, Californian, and New Zealand rabbits over time, which are known primarily for their high-quality meat and large size. We still have American Sables – but their large size prohibits them from being shown in competition.

Back on our urban farm, we bred seasonally, because one breeding pair's (a buck and two does) offspring filled the available indoor and outdoor space. We learned how to store forage over winter, and to ensure year-long supplies of fruit-tree twig treats.